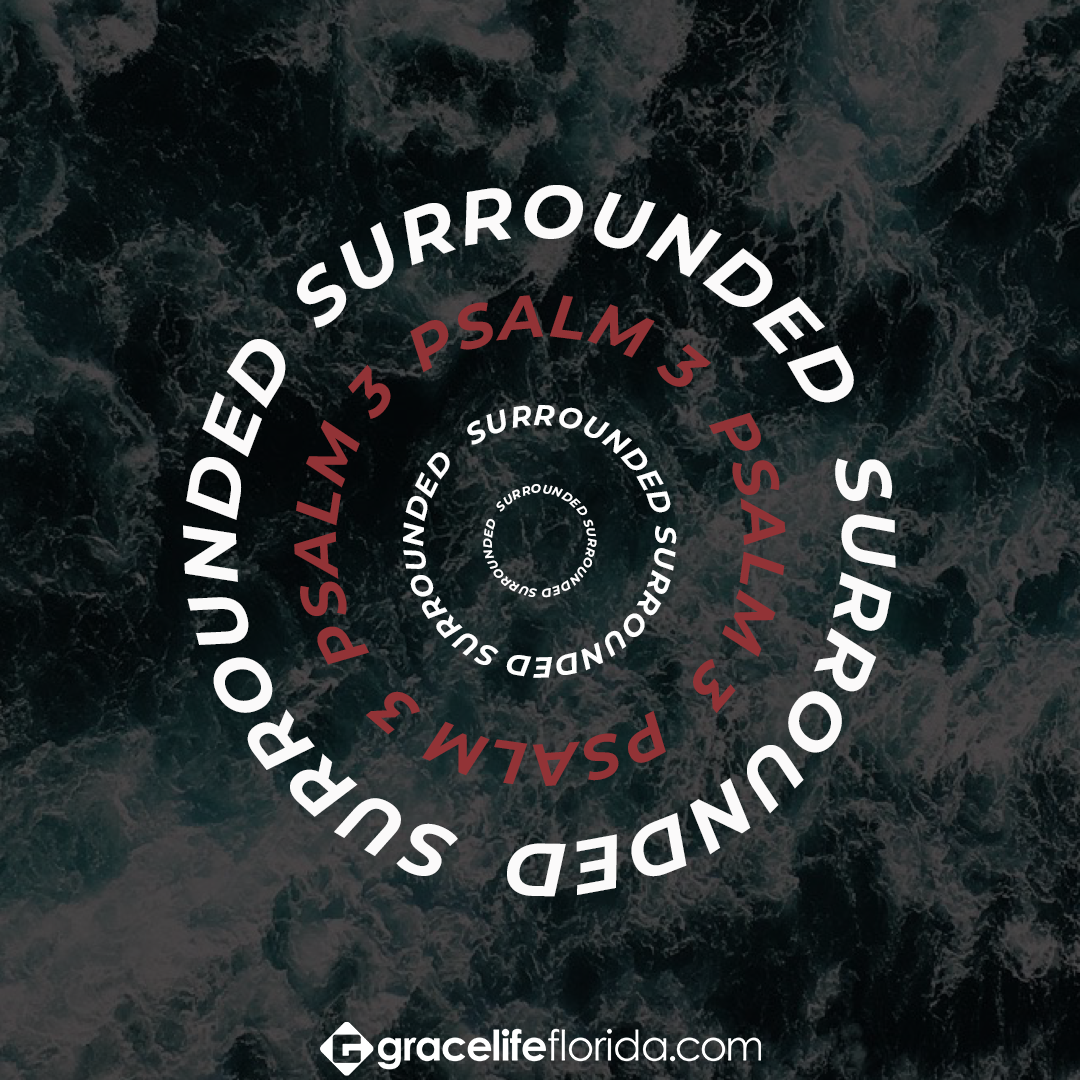 Have you ever felt surrounded? Pressure, trouble, enemies…hemming you in and backing you up—with nowhere to turn? That’s where King David found himself when his son Absalom betrayed his trust. In a gut-wrenching act of treachery Absalom staged a mutiny against his own father. He “stole the hearts” of key leaders and virtually crowned himself king, driving his father from the city (2 Sam. 15).

You can almost feel David’s anguish when he cries out to God in Psalm 3 “O Lord, how many are my foes! Many are rising against me; many are saying of my soul, ‘There is no salvation for him in God.’” Hear his agony? My foes. Against me. My soul!

It doesn’t get more personal than that. David had killed his tens of thousands of Philistines. He was no stranger to enemies or war. But his own son? His own flesh and blood? This was betrayal at its worst. Close, personal, painful. And it was probably embarrassing. Can the king who can’t even control his own son be trusted to rule the kingdom? Brokenhearted and dejected, David fled the city in shame.

Mockers cursed and threw rocks as he passed, adding to his shame. It was a low point for the kingdom. Arriving in darkness at his camp, David probably reflected on the enemies surrounding him and launched into his Psalm 3 prayer.

But as he prayed, something astonishing happened to David. A strange peace overwhelmed and settled his heart. Listen to the change in his prayer. “I lay down and slept; I woke again, for the Lord sustained me. I will not be afraid of many thousands of people who have set themselves against me all around.” What! From pressure to peace. From stressing to sleeping! What happened? Pay attention here because David sheds light on how we can face and overcome the troubles that surround us.

His moment of clarity comes in verse 3 “But you, O Lord, are a shield about me, my glory, and the lifter of my head.” That’s it! Before, David was ashamed and afraid; burdened by the weight of his son’s betrayal. But then something else became more real to him—and more powerful. He’s not only surrounded by trouble…he’s surrounded by God! Gripped by that reality, he calls the LORD his glory. That word means heavy or weighty. It’s what gives us meaning and value. It’s our identity. Our spiritual center of gravity. It’s what makes us ‘count.’ It’s whatever you hope in for meaning and worth.

God became David’s glory. Not his status as king or his success as a parent. God was also David’s shield. An impenetrable defense. Unassailable protection. And last, David calls God the ‘lifter of my head.” That blows shame out of the water. God is essentially reaching down to David and lifting his face, declaring to him, “Look at me…you have nothing to fear. You have nothing to hide. You have nothing to prove. Just trust me.”

What happened? God became more real, gripping and overwhelming to David than his trouble. And that changed everything. David was truly surrounded—by God’s love. Do you know what a shield does? It’s held out in front of you to receive the blows aimed at you. It absorbs the strikes. Because it’s beaten, you remain whole. Because it’s splintered, you stay in one piece. God was David’s shield. He always had been.

And Jesus is your shield. He took the blows. He absorbed the strikes of God’s wrath. In a similar walk of shame that took him outside the gates of Jerusalem to a bloody Cross, Jesus stood in your place as a substitute. And as a result, he is now your glory. He’s the lifter of your head. And you have much more clarity than David ever did. You are adopted, justified, saved and sealed. More than a conqueror and a joint heir with Christ. You’re surrounded! And if God is for you, who can be against you?

So when you’re attacked, abused, abandoned or ashamed. When your soul is shaken to the core. Remember, you are surrounded by something. No. Some-ONE more real, more powerful, more compelling. You’re surrounded by Christ!