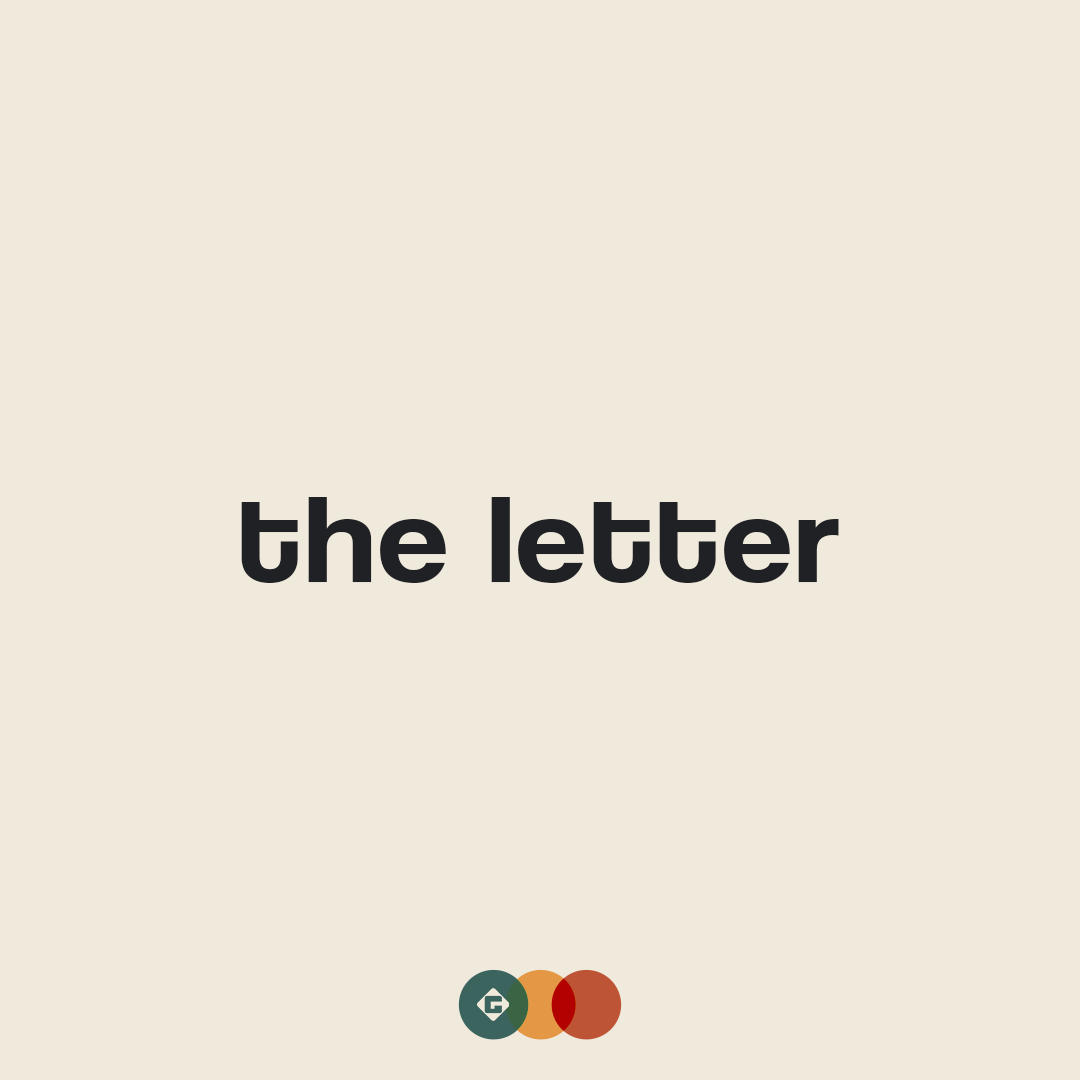 Long ago, people wrote letters by hand. They didn’t text, email, or snapchat. No memes, gifs, or emojis either. As tedious and boring as it sounds, those hand-written letters carried more weight and left longer impressions—at least on me.

As I reflect on the personal letters I’ve received, three stand out. One was from my mom after I moved 5 hours away to a university and pledged a fraternity. She actually wrote dozens of letters, but they all read the same to me.

Every week an envelope filled with my mother’s unconditional love and heavenly wisdom arrived. She would usually include some Scripture, an update on the familiar happenings from home, and close with “I’m praying for you.” Her beautifully written, blue-inked, cursive writing brought comfort at a time when I was anxious. No matter how busy I was, I opened and read those letters like a hungry man sitting down to a chicken dinner. Attending college in another zip code was a dangerous move for me. I needed to be reminded that I was loved and prayed for by someone who knew me.

My dad wrote a letter to me after I returned home from college and struggled to break free from the party culture I had embraced while away. After failing a sobriety test, I was arrested and taken to the police station at 3am. My dad picked me up and we drove home in silence. My shame was unbearable. I couldn’t get back to my bedroom fast enough. When I emerged the following day, I found a sealed envelope waiting on me with my dad’s unmistakable handwriting on the outside that simply said, “Tommy”. I retreated to my room and opened it with trembling hands.

Not a word of judgment in the entire thing; a surprise for someone who expected—and deserved—it. His letter was filled with love, forgiveness, hope, and encouragement. That letter preserved me from sinking under a mountain of shame and condemnation.

Fast forward my life-tape about 10 years. I’m in my early 30’s serving at a local church as a college director of sorts, a pastor-in-training. Many leaders served in that church and I found myself desperately seeking their approval. Most respected me, but the pastor charged with oversight of my ministry, I could never figure out. Did he like me?

He expected so much and seemed critical of many of the projects and ideas I brought to the table. Naturally, I thought he was against me. But for the life of me, I didn’t know why. So I grew suspicious, paranoid even. I’m sure it was obvious. I wasn’t myself when he was around. When I was engaged in ministry of any kind within his view, my efforts were a performance. I’m ashamed to write that, but it’s true. I desperately wanted his approval. I wanted him to acknowledge my hard work. I needed to know he was with me, not against me. I needed to know where I stood with him. He was a mystery to me.

As time went on, I began to conclude that this man, this pastor, may very well be my enemy. One day I walked into the copy room and found a letter in my mailbox from him. It was signed, and written on a church letterhead. It looked official. I braced myself for the worst: a formal invitation to tender my resignation for failing at college ministry.

But to my everlasting surprise, it was a thank you letter. I had been laboring so hard, watching my back, minding my Ps and Qs, that five years of challenging, exhausting college ministry had sped by. Every five years, employees received an official letter of review and recommendation from a pastor. This was mine from the man I thought had it out for me. Turns out, he was in my corner all along. I couldn’t believe what i was reading.

His letter was precious. It was powerful. It made me cry. I read it, then re-read it. Then I read it to my wife, and she re-read it. Then I knocked on his office door, and with tears in my eyes thanked him. For years, I kept that letter in my top desk drawer. I read it often—especially when I doubted whether or not I was called to serve in pastoral ministry. I still have it somewhere.

You may be wondering, “What was so magical about that letter?” It’s simple. He told me he loved me. He told me he was proud of me. He told me he noticed and admired my hard work. He told me that what I was doing mattered, that he saw fruit from my ministry, changed lives, impacted families, discipleship, conversion. He told me that he enjoyed listening to my teaching and watching me engage the elusive college crowd in our church. I was floored. I still am to be honest. His words changed me.

How I treasured that letter. I read it every day for months. My wife and I still smile when we remember the impact that letter made and how it ended my quest for his approval. I was loved. I had proof in my top desk drawer. Letters matter.

What if God wrote you a letter like that? What if His feelings toward you were no mystery? What if His acceptance of you was etched in a beautiful, easy-to-understand simple letter? This probably won’t come as a shock to you now, but God did just that. He wrote a collection of letters that we call the Bible. They’re all important. They’re all from God. They all matter. One of those letters that stands out was written on God’s behalf by a man named Paul, and that letter was first addressed to Roman Christians in the first century—and by extension, to you and me. It’s powerful. It has shaped history and transformed many countless lives.

And beginning this Sunday at GraceLife Church, the congregation that I serve, we’re going to launch a study through that entire book—all sixteen chapters rich with Gospel truth that can change your life.

Throughout that letter, Paul unpacks and celebrates the good news that Jesus is for us, not against us, that He came to die for sinners, to redeem us, to adopt us, to free us from a thousand tyrannies and seat us together in the heavenly places with him as redeemed sons and daughters of the king. For many weeks to come, I’ll be unpacking the good news of that letter on this blog. You can find those messages here.