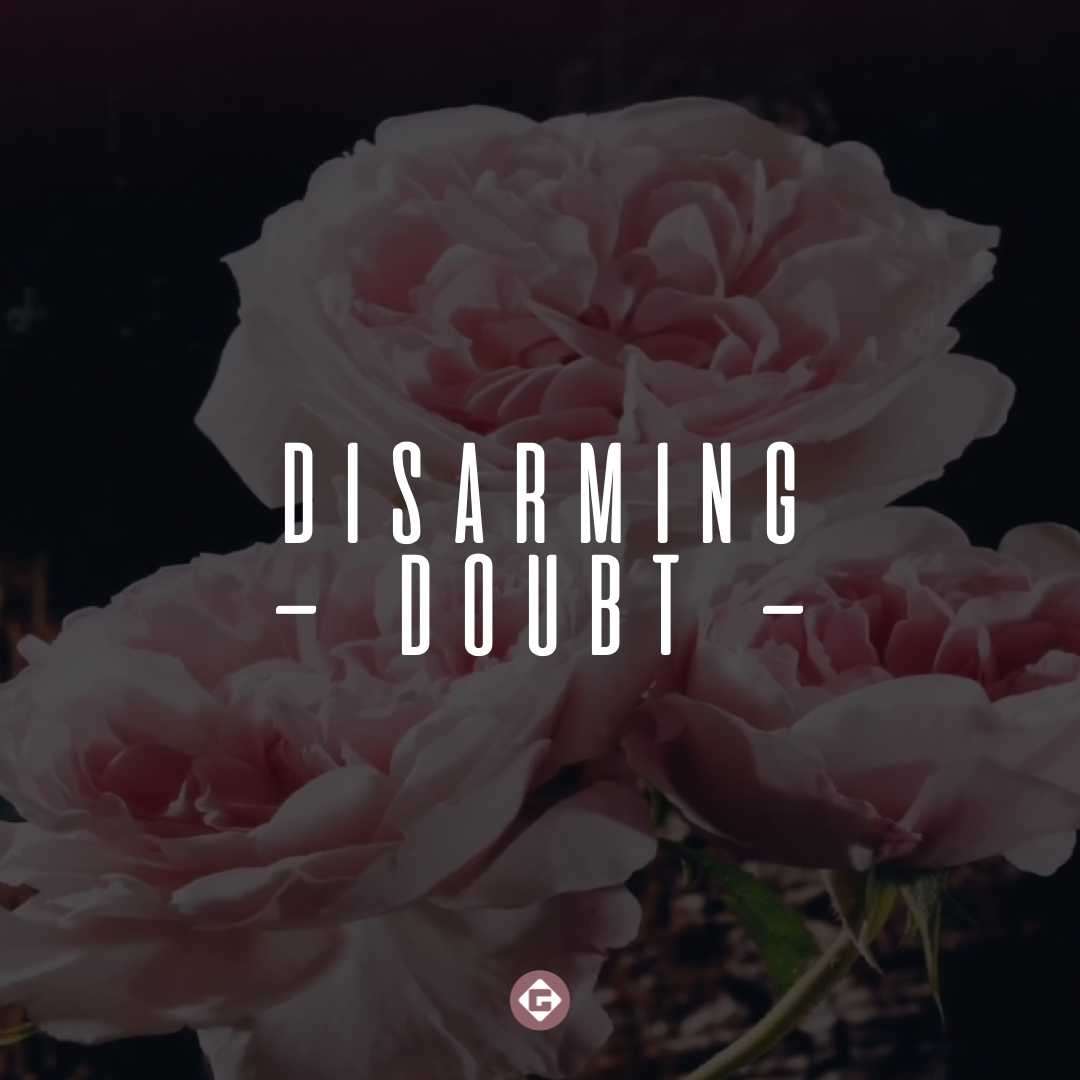 The French philosopher René Descartes summed up the Enlightenment when he said, “I doubt, therefore I think.” You know the rest of his statement. “I think, therefore I am.” In other words, doubting is part of being human. It’s at the core of our existence.

Because of life’s relentless disappointments, we’re naturally skeptics. Doubt comes easy for us in a world of broken commitments. Politicians toss their campaign promises. Spouses betray their lovers. And the number of religious leaders entangled in a scandal of some kind grows each year.

Robo callers, scammers, hackers, and porch pirates. You can’t blame Americans for being cynical and suspicious. So expect doubt whenever you pass along any “good news.” But when it comes, don’t freak out. Disarm it.

When you read about the resurrection of Jesus in the New Testament, you get the impression that the authors anticipate doubt, and go out of their way to disarm it. Take Mark for example. His gospel account is the shortest. He seems almost in a hurry.

But when Mark comes to the death and resurrection of Jesus, he slows down to carefully record details. Why? What difference does it make what time of the day Jesus died or in what language he cried out from the Cross? And do we really need to know where Simon, the cross-carrying stranger was from? Apparently we do, because Mark lists them all. Names. Times. Places. Even Colors. What’s he doing?

He’s sourcing. You might even call it “footnoting.” Mark expects you to doubt this story. It’s too incredible, too astonishing, too unbelievable to swallow without some proof.

By listing names, Mark invites his readers to corroborate his story (after all, many of the people were still alive). But he does something even more powerful that’s easy to miss. He shows us the weakness, fear, and unbelief that plagued the first followers of Jesus.

On three different occasions when traveling up to Jerusalem, Jesus pulled his disciples aside and told them he would suffer, die, and rise on the third day.Three times (Mark 8:31; 9:31; 10:34). Three. Times. Mark it.

Why bring that up? Because Mark points out that when Jesus rose from the dead and walked out of his tomb—on the third day, mind you—not one of his disciples was there to greet him. Not one. Why? Because they didn’t believe he would rise.

It was women who actually visited the tomb. And Mark tells us their reason was to anoint a corpse, not welcome a resurrection. On the way, they were stressing over who would roll the stone away from the tomb. Where were the men? As far as we know, they were still hiding because they didn’t believe either.

The women stayed behind at the Cross. The women watched where the body of Jesus was placed. The women went to visit the tomb on the third day to anoint Jesus.

According to Mark, that’s how it went down. Nobody believed a resurrection would occur. Not even his closest followers. Do you understand the implications? If you’ve ever doubted the resurrection, you’re in good company!

Mark highlights the role women played as the first eye-witnesses to the most central event of the Christian Faith. When the New Testament was written, women were marginalized in that culture. Their testimony was inadmissible in court. As witnesses, they had no standing at all.

Here’s the point. If you’re trying to start a movement by fabricating the resurrection of your religious leader, the last thing you’d do is list women as the most important eyewitnesses. Nobody would take you serious. Nobody would write women into the story like that. Unless, of course, that’s exactly what happened and they saw it first.

Those ladies were the first and last to love Jesus on this earth and their witness was good enough for God. What a beautiful tribute to women! But Mark is after more than just elevating the dignity of females, as important as that is.

Have you ever read something and thought it was a little…off? Too nice. Too neat. Too arranged and predictable? Maybe even a little staged? I have. It’s a terrible feeling you can’t shake. The feeling that you’re reading the product of someone’s overactive imagination, not history. That’s not Mark. He tells it like it was, in all it’s strange, untidy, but historical glory. Now consider his ending. I’m warning you. It’s beyond weird.

And they went out and fled from the tomb, for trembling and astonishment had seized them, and they said nothing to anyone, for they were afraid (Mark 16:8). Sound like a strange way to end a story? Some copyists found Mark’s ending so bizarre and inconclusive, they added their own (as your translation probably indicates). What gives?

Again, this doesn’t put the first followers of Jesus in the best light, does it? How embarrassing! They didn’t believe. They were bewildered and confused. They left the tomb trembling, saying nothing to anyone. How sad. How unfortunate. How authentic.

See, Mark could have put all the disciples at the tomb on the third day to welcome back their resurrected savior. He could have left the women out and sent the apostles running heroically through every village in Judea to spread the good news.

The only thing is…that would be a lie. Pure fiction. What really happened was what we read. The apostles were AWOL. Who knows how far Peter ran away into the night. The women were there, but in a panic. They fled in terror and told no one. The end. Does that disarm your doubt? It does mine. I can see myself doing the exact same thing. Maybe you can too. And maybe that’s the point.

To hear the complete message on Doubt, click here.